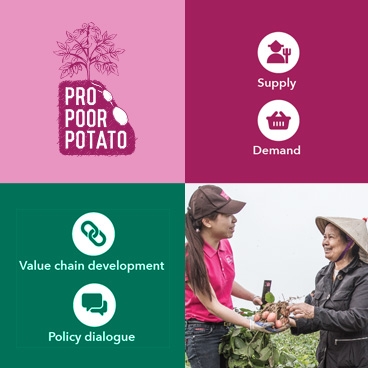 How to achieve food security, improved nutrition and accelerate sustainable agriculture in Vietnam? How to increase the income of small scale farmers in Vietnam?

For more in-depth information about the progress in year 2 of the ‘Growing out of Poverty’ with potato project and projection to year 3 kindly download the full newsletter of Year 2 below: 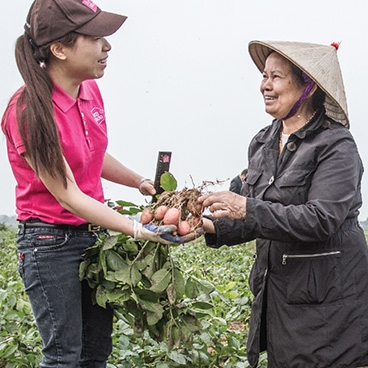 To reinforce potato production and boost potato consumption in Vietnam 3 companies and 1 institution with the aid of the Dutch government, joined forces to vitalise the Vietnamese potato sector as part of the project “Growing out of poverty with potato”.

Vietnam is one of the most rapidly developing economies in Southeast Asia, which culminated into the status of middle-income country in 2009. The associated urbanisation and transformation of agricultural land into industry and housing has put pressure on food provision. Despite the fact that there is currently no food shortage in Vietnam, food security is high on the national agenda and the country is essentially depending on rice- 94% of total arable land is rice production.

There is ample potential for the development of a professional potato sector in Vietnam. The tuber offers abundant opportunities to improve food security. Besides, it provides an addition income for farmers due to cultivation period in the rice off-season in North-Vietnam and high yield potential.

Although potato consumption is still low, recent trade statistics clearly demonstrate that the Vietnamese potato sector is not able to produce sufficient potatoes to meet this growing domestic demand. From an import level of fresh potatoes of just US$ 1.1 million in 2003, fresh potato imports expand to US$ 44.6 million in 2011 (UN COMTRADE statistics, 2012). The real figure will probably be double as high, as the large majority of imported potatoes are imported through the Chinese-Vietnamese border, and accurate data of this volume is not available.

Despite the fact that domestic potato demand is higher than local supply, to date potato has remained a low interest crop to both producers and consumers. The development of a professional potato sector is currently trapped in a vicious circle of low-interest – low quality produce: Most farmers are unaware of the economic potential of potato farming. They lack the knowledge on advanced cultivation techniques and good planting materials. Therewith the productivity is low and the disease pressure is high. As a consequence the market, both professional processing industry and end-consumers are met with an inconsistent volume and quality supply. Low yields for farmers and low quality to end-users keep potato in the low interest category.

But even despite being of limited interest, a small increase in per capita potato consumption results in steep rise in demand on a national level with a population approaching 90 million.

“Growing out of Poverty with potato” is a project of Fresh Studio, PepsiCo Food Vietnam, Agrico and Applied Plant Research-WUR and the Ministry of Foreign Affairs of the Netherlands within the Facility for Sustainable Entrepreneurship and Food Security (FDOV).

The desired result for this project is to make Vietnam more self-sufficient in potato production: to create a sustainable potato sector that is able to compete with Chinese imports and is able to supply the domestic table potato market and potato processing industry with a consistent volume and quality offer. The project aims to realise this by: 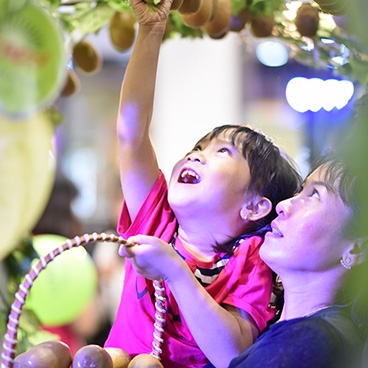 Between the rainy days in Ho Chi Minh City Fresh Studio organized together with its client Zespri a special Consumer Event called ‘Wake Up with Zespri kiwifruit’ in one of the larger shopping malls in the city.

This event was organized to bring an interactive and pervasive Zespri brand experience to participants by entertaining and educative activities. The event reached over 3,000 visitors.

During 1 whole day from 9 to 10 PM visitors of the AEON shopping mall could enjoy games such as basketball, sack jumping and puzzle games. The games were created for (1) entertainment and (2) to educate visitors of every age about the origin and the nutrition of New Zealand kiwi fruit.

The interactive brand experience was furthermore translated into a real-life orchard for visitors to experience, play and learn about how the Zespri kiwi fruit is grown in New Zealand.

A special area was set up where people could take photos (read: selfies) with famous Zespri landmarks such as the New Zealand kiwi orchards and the giant kiwi fruit in Te Puke. Visitors created a buzz about Zespri online by sharing their photos on Facebook using hashtags such as #ZespriVN, #Zesprikiwifruit, #Zesprikiwi.

Besides games and photo areas the daily program included dance teams and several cooking shows on stage where kids were able to cook small dishes for their parents by the helping hand of a professional chef.

With Fresh Studio leading the Vietnamese campaign, the volume growth of Zespri in the Vietnamese market has been impressive. The marketing activities, such as this event, have significantly driven and contributed to the double-digit year-on-year sales growth since 2008.

Are you interested to organize a unique, entertaining and educative event for your company, your brand or any other purpose kindly contact us for more information!