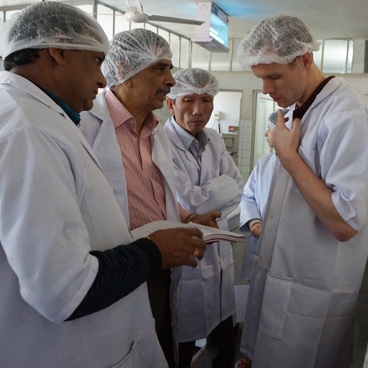 Fresh Studio organized for its client a study tour to India, the largest milk producer of the world. The aim of the tour was to investigate the dairy market of India in order to identify opportunities for development of the dairy sector in Vietnam.

India has a complex dairy sector where approximately 20% of the milk production is processed through the formal sector. Before 1970, India was a milk deficient country. Due to the largest dairy development program in the world – Operation Flood – it became world’s largest milk producer (both cow and buffalo milk). Despite the success of Operation Flood, the average milk production per cow is still one of the lowest in the world. Fresh Studio organized the study tour in order to learn from the experiences of Operation Flood and to investigate more recent developments in this emerging dairy market to discover opportunities for improving the Vietnamese dairy sector. Focus of the study tour was on contract model schemes, technical extension and access to finance for smallholder farmers.

The study tour visited AMUL; the key example (and model) of Operation Flood’s development. AMUL started as a village cooperative in 1945, but currently processes milk from 3.2 million farmers throughout India and is the largest dairy processor of Asia.

Also processors with different contract models were visited in Gujarat, Haryana and Punjab. For example, in Punjab over 85% of milk is processed through formal channels. The farms are much larger and milk production per cow is much higher compared to other provinces in India.

Next to dairy processors, several governmental institutions that focus on extension to smallholder dairy farmers were visited in Gujarat, Punjab and Hyderabad.

The study tour provided useful insights for the Vietnamese dairy sector into different models of dairy processors, how smallholder farmers are technically as well as financially assisted to expand their business and how extension models can be applied in different situations.