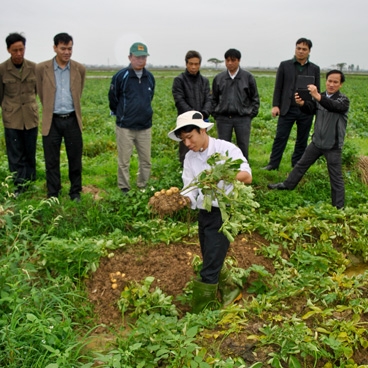 The first potato production season within the Dutch funded project “Growing out of poverty with potato” has been completed. During this first seasons potato trials, potato field days, farmer trainings and market research activities have been implemented. The key first outcomes are shared below.

The trial results of this year trial are positive: all new varieties have higher yield and better quality in comparison with the standard potato varieties included in the trials. The registration of the five new potato varieties is expected to be completed in 2016.

Vietnamese training materials have been developed to train Vietnamese farmers in potato production. The training consists of 3 modules which covers the aggregate from seed potato variety selection o to storage of the harvested potatoes. Over 350 farmers (69% female) are trained during the potato season in the 3 training modules. The training was implemented in 4 provinces (Nam Dinh, Thai Binh, Bac Giang and Bac Ninh) in North-Vietnam. Later this year farmer training in the central highlands (Lam Dong province) will start.

The general objective of the marketing activities is to grow the potato consumption in Vietnam beyond fries and crisp and increase the preference towards new high quality table potato cultivars in Vietnam. The research activities in the first phase included an extensive baseline market study, covering the main consumption hubs in Vietnam, Hanoi and HCMC. Results showed that, although consumers in Vietnam show a positive attitude towards potato consumption, they are rather unaware of the nutritional benefits of potato, the versatility in modes of preparation of potato and the variation in potato quality based on variety characteristics.

The inclusion of potato in the diet is considered important in addressing nutrient deficiency among younger children and pregnant women, in particular in relation to iron deficiencies. Sector interventions are thus not limited to potato cultivation, but include focus groups, household panels and sensory consumer tests to obtain in-depth insights in table potato consumption and practices in Vietnam.
All combined activities will inform the selection of most potential cultivars for the Vietnamese market, as well as the development of a potato awareness campaign. To measure the effectiveness of the marketing communication interventions the survey applied in the baseline research will be repeated on an annual basis.

Fresh Studio can look back on a successful first potato season in which a strong basis for the next 4 years has been created to vitalise the Vietnamese potato sector. 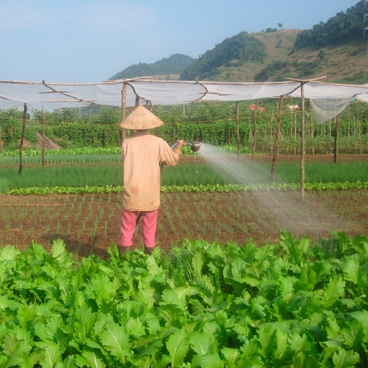 ‘Rau an toàn Mộc Châu’ or ‘Moc Chau safe vegetables’ are now presented daily on the tables of many families, canteens and restaurants in Hanoi, meeting the demands of many consumers for safe, fresh and delicious vegetables.

This is a result from strong linkages between the Moc Chau district authority, Son La provincial Department of Agriculture and Rural Development (DARD) and the research team of the ACIAR-funded project ‘Improved market engagement for counter-seasonal vegetables producers in North-West Vietnam’.