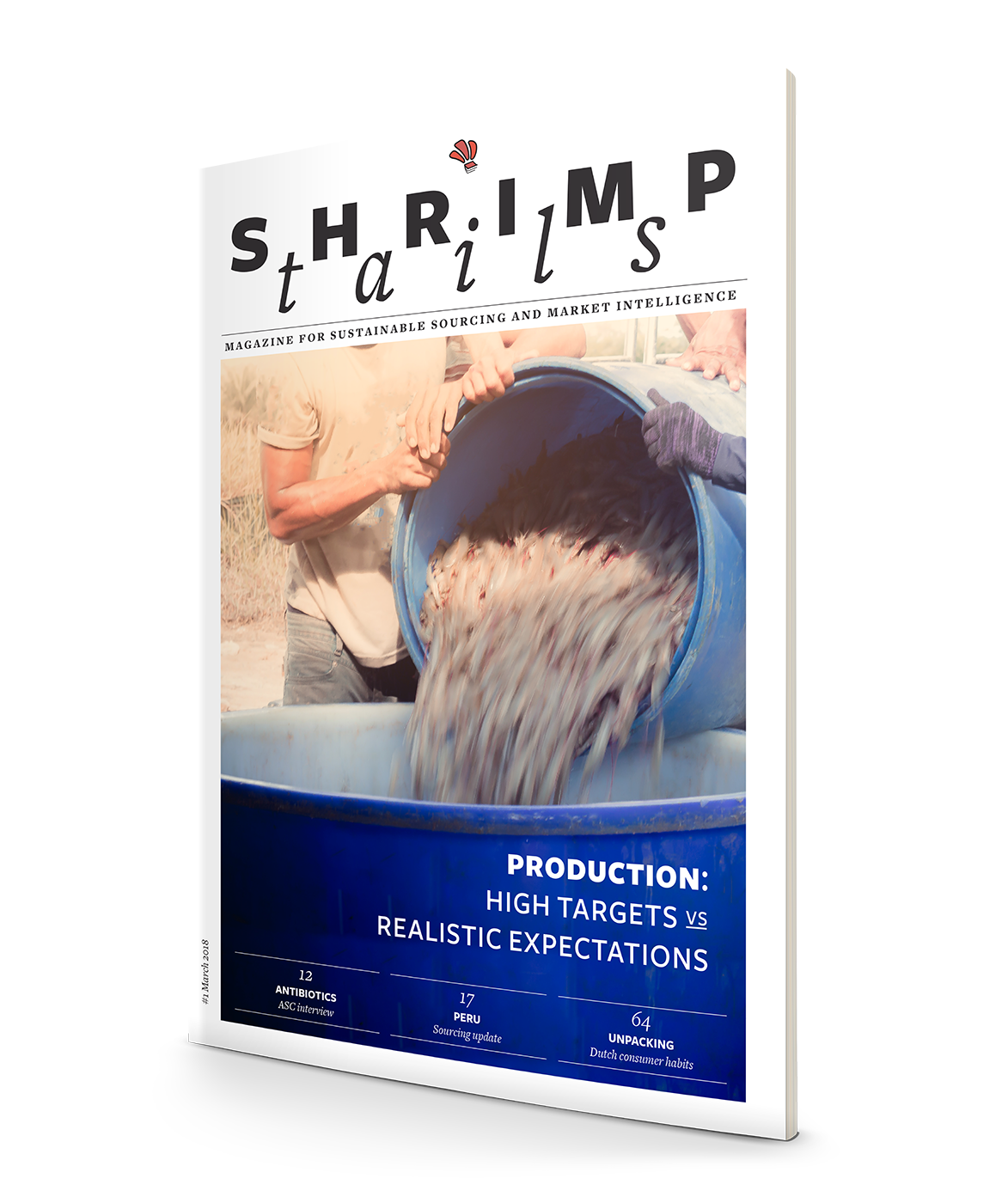 A complex and varied shrimp industry

2017 was a productive year for shrimp in most of the main countries of origin. Despite a strong performance, fundamental constraints continue to threaten the shrimp sector, which revolve around the tangle of actors in the supply chain, and questionable practices at different steps of production.

“The aquaculture sector is far from being homogeneous”, explained Daniel Knoop in 2016, international aquaculture program manager at Solidaridad and co-founder of STIP. “There are a lot of products on the market and an equal amount of distribution channels. It is alsothe world’s fastest growing food industry. New initiatives and businesses are springing up everywhere. However, this type of rapid growth tends to come at the expense of sustainability.”

Pressure to address these issues is growing, particularly as regulators in Europe and the U.S. are tightening regulations on food safety and traceability of imported products. Meeting such expectations is however difficult, as the vulnerability of shrimp to bacterial and viral diseases destabilize the consistency of supply, and the dominance of small-scale farming among the multitude of developing countries frustrates efforts to implement quality standards.

2017 has also seen historical changes in the global shrimp trade order. Although shrimp has traditionally gone for export, domestic consumption is increasing as producing countries are becoming better-off. It is also becoming more accessible as the value of their shrimp in real terms is dropping. For instance, while China would have exported large amounts of its own shrimp production few years ago, the country became last year a net importer. With the magnitude of its own population China is the new determinant of the global shrimp market.

In this context, buyers urgently needed greater transparency in order to identify the opportunities and risks of procurement in specific countries, acquire knowledge on traceability, gain insight into problems affecting their production chains and find suppliers capable of providing sustainable products.

Yet despite the very globalized state of the shrimp sector, no tool was capable of offering a sufficient information set.

On the basis of this observation The Seafood Trade Intelligence Portal initiated the idea of Shrimp Tails, the only magazine compiling news and analysis of the shrimp sector worldwide.

“In each edition of Shrimptails, we will give you a look at the recent trends and near-future projections of the shrimp industry in Bangladesh, Ecuador, India, Indonesia, Peru, and Vietnam. Each edition will also give you market trends and insights of European countries and regions. These standardized country updates are complemented with in-depth background stories and interviews to add additional context to the wealth of information provided” said Willem van der Pijl, director at STIP.

Partners in all countries of origin participated in this unique assignment, gathering and compiling intelligence for the STIP team based in The Netherlands. Fresh Studio, as the local STIP partner, took care of Vietnam’s section. For this job our passionate aquaculture team worked closely with farmers, processors, diagnosticians, feed suppliers, and government officials, to provide a realistic diagnosis of what is happening in reality on the ground.

Read the first edition of Shrimp Tails Magazine for more details about our Vietnam’s shrimp sector review, and don’t miss the second edition in June!