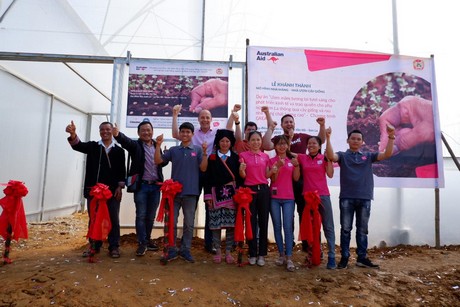 It might not seem like a big greenhouse that was opened this week in Son La, Vietnam, but it is the start of something bigger. The greenhouse is the first of 13 being opened in the region as part of a social project and, if it’s up to Rene van Rensen with Fresh Studio, the first of many more in the future. “The area is very well suited for a large horticultural presence, if you look at the climate and the people of the region, but it needs time.”

Thirteen greenhouses
Take a breath and read. “Sowing a bright future for economic development and women’s empowerment in Son La province, Vietnam through high-quality seedlings and greenhouse vegetables.” That’s the name of the project the new greenhouse is part of and which was developed and is managed by Fresh Studio. In total thirteen greenhouses are going to be built for the project in the coming months: Eight will be nurseries, and five will be for vegetable production.

This first one is meant for growing vegetables. In the coming weeks, the first cultivation will be starting in the greenhouse. “In the beginning, we will be cultivating the crops that do well in colder circumstances, such as: lettuce, broccoli, spinach, and potentially squash,” Rene says. “Later on we will also start cultivating fruit crops like tomatoes, cucumbers and bell peppers. What we can cultivate is obviously dependent on the climate, we have to figure out at what time of the season it is possible to grow which crops, but also on the demand from the market. For the seeds with Semillas Fito and Pop Vriend Seeds we have two excellent project partners to supply the right varieties. And with Royal Brinkman and BVB Substrates we have the right partners to supply all greenhouse technologies the growers will need. And Applied Horticulture Research from Australia will provide training and technical support as a project partner.”

Next week the first nursery of the project will be completed, according to Rene a very important part of the project. “In this region, there are no professional propagators, so in reality, they are growing from one step behind. By setting up these nurseries and training growers to propagate, you can reach thousands of growers. One greenhouse will help one family and the people that work in the greenhouse, one nursery could potentially help one hundred growers get high quality seedlings,” he says. “Nurseries have a larger reach, and a larger positive impact on the growing market. You have to begin at the foundation, which is good quality seedlings.”

GREAT
The project is part of the Australian government initiative Aus4equality, and is affectionately referred to as “GREAT”: Gender Responsive Equitable Agriculture and Tourism. The program is focused on developing local economies, as well as specifically helping women develop themselves further.

Local production
The GREAT project is specifically focusing on the northern area of Vietnam, because local production is in very high demand in this area. “One of the reasons to grow in these areas is that during the summer, when it’s around 30°C to 40°C in the areas surrounding Hanoi, the Delta will be filled with rice and there is a lack of vegetable production in the Hanoi area,” says Rene. “So vegetables are sent to Hanoi from China or Da Lat, but even from Da Lat it’s still two days of travel to get to Hanoi. But here in the highlands, the climate during the summer is perfectly suited for vegetable growing. About 8 million people live in Hanoi, so you can grow plenty of vegetables for that market during the summer.”

Greenhouses
True to the spirit of the project the greenhouses are being built by a local greenhouse builder, Lam Da. Lam Da and Fresh Studio looked at designs for the greenhouse together. “Ultimately we landed on the Umbrella Vent type, which is well suited for the local climate conditions,” Rene says. “The gutter height is 4.5 meters, so the top will be 8 meters high in order to make sure there is enough volume to realize a good climate.”

The film for the greenhouses is supplied by Agripolyane in France and is called Celloclim. One of the special features of this greenhouse film is that it has a cooling effect due to the bubbles inside the film. This ensures that the greenhouse stays cool when it is too warm outside. On top of that, the film is very diffuse which is especially beneficial for fruit crops as it results in much better penetration of sunlight.

Help
Fresh Studio will continue to support the growers during cultivation, and guide them throughout the next two years. “We are also looking at introducing new products with more added value, such as cherry or cluster tomatoes, during this time,” says Rene. “Although we have a lot of experience related to greenhouse production in Lam Dong province, we have never done something like this in North Vietnam, so this is kind of a challenge. We have to see which varieties work in these particular conditions, but finding the right variety is also the fun part of the work.”

However, after the project comes to an end, Fresh Studio will continue supporting the growers in Sơn La, but on a commercial basis. “This is a nice part of such a project, you can use it to figure out a lot of things and educate and coach local growers,” says Rene. “First you set up a pilot, and afterwards you can upscale and let it continue on a commercial basis. In the end seedling and vegetable production has to be self-sufficient. We have realised this with other projects as well, so I’m sure we will succeed again to realise this.”