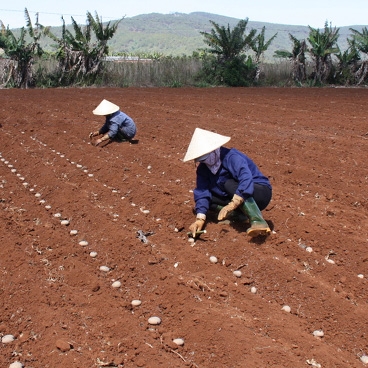 As part of a project of NAK AGRO to strengthen the Vietnamese seed potato production sector Fresh Studio is carrying out potato trials in North Vietnam and in the Central Highlands of Vietnam.

Potato is an important crop in Vietnam of which the current annual demand is surpassing the annual produced volume. One reason for this is that the established seed potato production sector in Vietnam is not well-organized. This results in poor availability of good quality potato seeds for farmers, which in the end is limiting the current potato production potential in Vietnam.

Since 2011, NAK AGRO is implementing a project in order to strengthen the Vietnamese seed potato production sector. As part of this project local authorities are trained in the production and inspection of seed potatoes. To support these training activities and to identify potential potato varieties to produce in Vietnam, Fresh Studio is performing potato trials in North Vietnam and the Central Highlands of Vietnam. The potato varieties will be harvested in 2014.