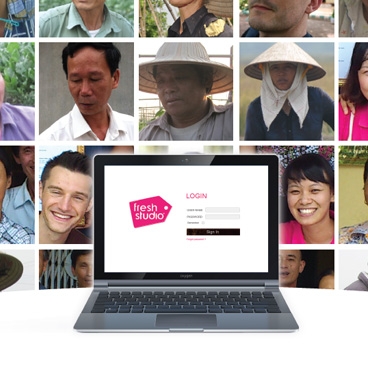 Fresh Studio launched the IT extension support system for agronomists and farmers. The pilot software has two main elements and is developed using the agile software development methodology. An online demonstration of the system is available soon.

2. Extension support
Allows agronomists to digitally report on visits to farmers. Currently reporting is done on paper with a number of unnecessary repetitions of work for agronomists and management.

Hi-World is an IT software development company based in Hanoi, Vietnam. A team of programmers worked closely with the team of Fresh Studio on requirements, development and testing of both the web-based application as the mobile Android application which will be launched next month.

The BoP Innovation Center (BoPInc) accelerates the number and impact of inclusive innovations in low-income markets. Inclusive innovations serve the demand of the poor and create shared value for all stakeholders involved. BoPInc incubates these innovations, shares learnings and improves the enabling environment.
www.bopinc.orgAlso interesting to read: 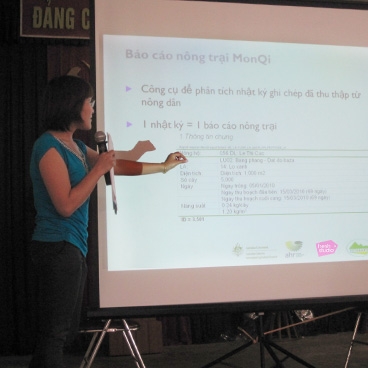 MOC CHAU – Bringing vegetable farmers together, with different techniques and farming styles, and comparing their performance among each other, will lead to improved yields, higher quality produce and increasing farmers’ income.

The weekend before the conference ‘Supplying the market of tomorrow’, a delegation from the Australian Centre for International Agricultural Research (ACIAR) participated in a farmers’ exchange meeting with three farmer groups in Moc Chau organized by the Northern Mountainous Agriculture and Forestry Research Institute (NOMAFSI), Hanoi University of Agriculture (HUA), Fruits and Vegetables Research Institute (FAVRI) and Fresh Studio.

With over 40 farmers present, the meeting focused on the three largest vegetable products supplied to Hanoi by the farmer groups during the past season: French bean, tomato, and white cabbage.

Opening up
Ms. Vu Thi Phuong Thanh (agronomist, Fresh Studio) started the meeting by giving a general introduction comparing the production area, assortment and volumes of vegetables sold under the project in 2012 and 2013. Ms. Thanh shared that “the total production area increased more than four times: from four hectares in 2012 to eighteen hectares in 2013. Moreover, the total volume sold to Hanoi retailers by the three farmer groups reached 155 tons from May to October this year.”

Comparing farm performance
After the introduction presentation, the farmers were split into smaller discussion groups according to crops (French bean, tomato and white cabbage) they produced,

The comparisons were used to fuel the discussion among farmers to answer questions like “What caused the differences in yield?” and “Why one farmer earned more than the other?” Farmers were very eager to share with fellow farmers how they grow their crops and how they think other farmers can improve their crop performance.

After the group sessions, FAVRI shared with the farmers the results of the post-harvest trials that they conducted. Transportation of vegetables by plastic crates proved to give the best results both on product quality and temperature management as compared to nylon bags and carton boxes.

The success of the 2013 season is yet another milestone in developing the vegetable sector of Moc Chau. The Moc Chau district is only a four-hour drive away from Hanoi making it an excellent regional alternative to supply temperate vegetables during the summer months of May to September.