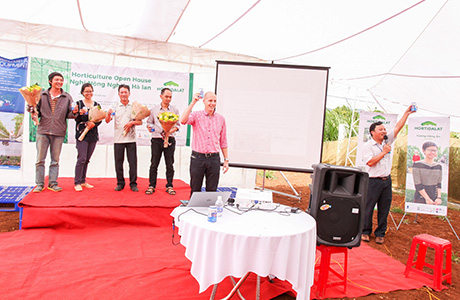 The Transition Facility (TF) project “Accelerating the development of modern greenhouse vegetable production in Vietnam”, supported by the Dutch Ministry of Foreign affairs started in 2014 in Lam Dong province. This project is coming to a close. To highlight the innovations introduced and celebrate the achievements a Dutch Horticulture Open House was organized at the R&D farm of Fresh Studio in Dalat.

The first ever Dutch Horticulture Open House was a huge success with over 300 attending farmers. Greenhouse technologies used within the project were exposed and demonstrated to farmers and project partners during the event. The Open House provided ample opportunities for networking and discussions. Also, the six pilot farmers, whom invested in imported greenhouses, were put into the spotlight.

The following results clearly show that this project contributed to the accelerated development of modern greenhouse production in Vietnam and has created a foundation to further introduce Dutch greenhouse technologies in Vietnam:

These results would not have been achieved without the contribution and support of all the project partners. We are grateful for this cooperation and look forward to see you all during the next Horticulture Open House at our R&D farm in 2018.

Modern greenhouse vegetable production can provide an innovative solution to meet the fast growing demand for high quality, safe and sustainable produced vegetables, which are year round available … 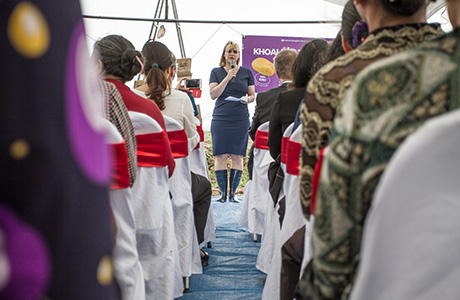 The Dutch Vice-Minister of Agriculture and local authorities of Bac Ninh province visited an event in the field of the project “Growing out of poverty with potato” in Tien Du district, Bac Ninh on the occasion of potato harvest and delivery of training certificates to participating farmers.

“Growing out of poverty with potato” is 5 year PPP (Public Private Partnership) project (2014-2019) between the Ministry of Foreign Affairs of the Netherlands, Fresh Studio (local project management), Agrico, PepsiCo Vietnam and Dutch Wageningen University. With the objective of setting an example of a sustainable value chain for high quality potato in Vietnam, the project has been implemented for two years and has acquired promising achievements. The event is the result of commercial production trials for two Dutch potato varieties, Markies & Rosagold, before putting in mass production.

Potatoes provide an interesting opportunity to improve food security, support pro-poor development and boost a healthy, diverse diet in Vietnam. Despite being richer in fibre, vitamins, and minerals than rice or wheat, with the production requiring less water and land, production and consumption of potatoes in Vietnam are still very modest. Potato has also been proved a profitable addition to the current crops planted by small-scale farmers in Vietnam.

Siebe van Wijk, Managing Director of Fresh Studio stated during his presentation: “The 5-year project stimulates supply, fosters demand, develops the value chain and initiates a structural policy dialogue to support a sustainable potato sector in Vietnam. The project is successful when the Vietnamese potato sector can compete with imports and supplies of both the domestic table potato market and the potato processing industry with a consistent volume of high quality potatoes”.

On the supply side, the project focuses on testing high-yielding varieties, training farmers and production advisors. After two years the project obtained among others the following achievements:

Speaking at the event, Marjolijn Sonnema, Dutch Vice Minister of Agriculture stated:“As one of the world’s biggest agricultural manufacturers, the Netherlands hopes that our expertise will help Vietnam in enhancing food security, promoting sustainable agricultural production, increasing farmers’ incomes, and improving their livelihoods”.

With a smart approach and dedicated implementing partners, it is positive that the project will be able to build a robust system for potato sector which can sustain and flourish even after the project finishes. And the day when Vietnamese potato can compete with imports, supplying effectively for the domestic market will be in vision. 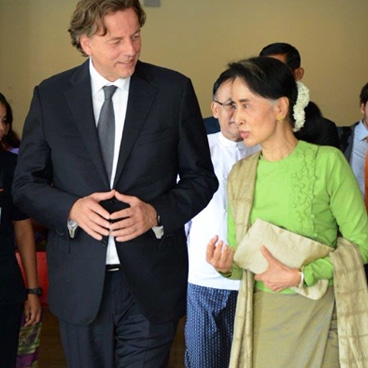 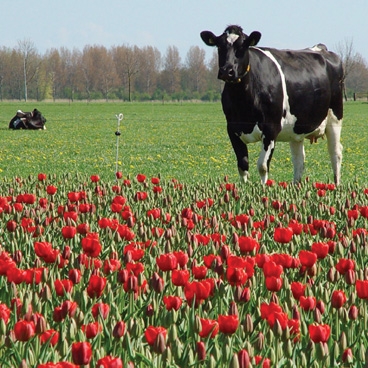 The Netherlands and Vietnam are both world players in the export of agricultural products. VIR’s Hanh Tung talks with Simon van der Burg, the Netherlands consul-general in Ho Chi Minh City, on the business opportunities offered by Vietnam’s agriculture and food sector to Dutch firms.

Dutch agriculture is renowned for its high-quality know-how and has a good international reputation concerning food safety and sustainable production. There are examples of Dutch success in Vietnam’s agriculture sector like FrieslandCampina, De Heus, Dalat Hasfarm or Nedcoffee. What are the reasons behind their success? 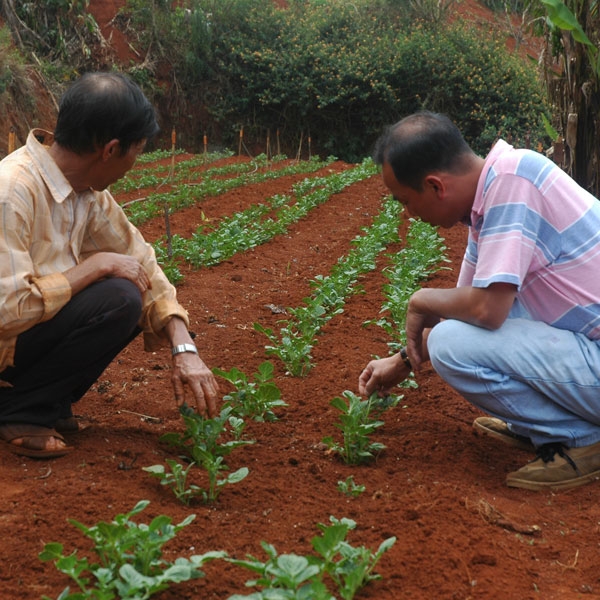 Fresh Studio joined with leading Dutch potato breeding companies, to select new and potentially suitable potato varieties. In close collaboration with its clients, Fresh Studio developed a variety of cultivation protocols. These new varieties and protocols were tested in random block-design trials during four different seasons. The tests were conducted at Fresh Studio’s own R&D farm in the Central Highlands of Vietnam.

These trials resulted in the selection of two much higher yielding and higher quality potato varieties than the currently farmed standard. With these new varieties and improved cultivation protocols, yields were increased from 45% to 80%. Post-harvest and processing trials (fry tests) showed that the new varieties performed better than the current standard.

During our organized field days, hundreds of potato farmers were able to observe the difference between varieties, and related cultivation protocols. Fresh Studio is currently working closely with its clients to introduce these new varieties, conduct more potato trials all over Vietnam, as well as to develop a plan to train large numbers of farmers in new potato cultivation protocols. 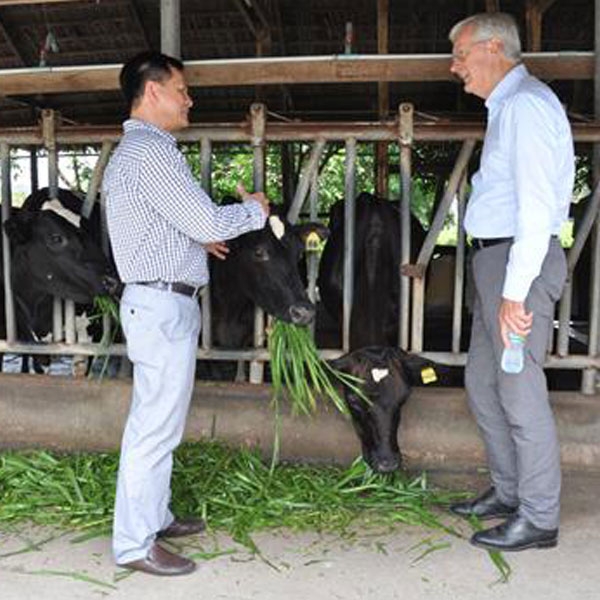 HANOI – ‘I am impressed to see how FrieslandCampina has worked successfully with local farmers to increase the production of fresh milk in Vietnam.’

Dairy communities
FrieslandCampina aims not only to boost production, but to develop ‘dairy communities’, Mr Knapen was told. Through education and training, the company has already helped 3,000 small farmers meet quality and sustainability standards, and collaborate with arable farmers who produce animal feed. FrieslandCampina organises the collection, processing and distribution of milk throughout Vietnam: from grass to glass – no mean feat in such a large country.

Fresh milk
The average farmer in Vietnam has 10 cows. Farms are generally many hours drive from the nearest milk factory, which supplies some 120,000 shops. Fresh milk is not easy to come by in Vietnam. Three-fourths of all milk products are made from imported raw materials, like milk powder. Demand for fresh milk products far exceeds supply. So FrieslandCampina is working with Heus, Wageningen University and Fresh Studios to increase fresh milk production by setting up ‘dairy development zones’.

From aid to trade
Mr Knapen’s visit to FrieslandCampina concluded his visit to Vietnam. He was interested in how the shift from aid to trade is being made. The Netherlands will end its bilateral development relationship with Vietnam at the end of this year (which year?), in favor of an economic relationship built on the knowledge and experience gained from development co-operation, and the expertise of the Ministry of Economic Affairs, Agriculture and Innovation.

At the end of his visit, Mr Knapen flew to Tokyo where he will attend the World Bank Group’s annual meeting. 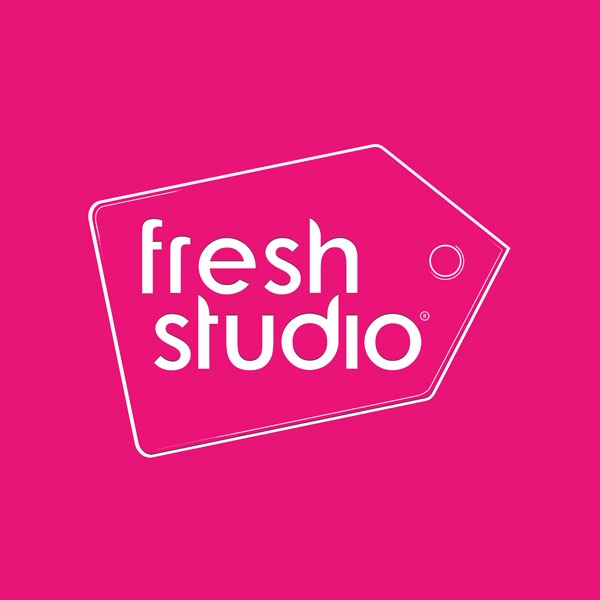 HANOI – The work of Fresh Studio in Vietnam attracted the attention of both the Vietnamese and Dutch press.

The article in het Financieel Dagblad can be found here: www.fd.nl Also interesting to read: 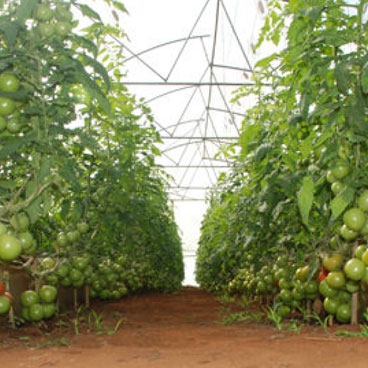 HANOI – In his story, Siebe van Wijk always used images to illustrate such as: farmers on the paddy field, harvester in green house, fish seller in the market.

All of these images contain a poor life, a smile, sad eyes and lament when there products are broken or reject. The young Dutch man talks about agricultural product of Vietnam as if it was the story of his family.

6 years ago, when he for the first time visited Vietnam, he fell in love with this country because there were quite some similarities with the Netherlands. For example by doing so well in agriculture, produce the value to feed the people, and the very high population density. Despite being a small country the Netherlands manage to be the second largest country in the world in terms of the value of exports of agriculture products, with a value of about $ 50 billions. Like the Dutch, Vietnamese like business, earn money, become the owner and develop. Each household farmer want to have progress, take risks, effort to get rich… but quite a large majority is still poor.